Back to Events Photos

3 PAGES OF PHOTOS – World Premiere Screening of THE BORINQUENEERS took place at the Newark Museum in Newark, NJ on July 13, 2007. Sponsored by Verizon (NJ), PSEG, Prudential, Puerto Rico Federal Affairs Administration, Newark Public Library, NJN, AARP, Newark Museum, Rums of Puerto Rico and New Jersey Hispanic Research & Information Center. There are three pages of photos. The slide show must be started at beginning of each page. Where known, there is name identification. Photos compliments of William Cruz and Jose Acevedo. Photos should not be copied, reproduced or distributed without permission.

Noemi acknowledges Doris Eugenio for her work on the film as an Assistant Director.

AARP was a sponsor of the event and had members throughout. 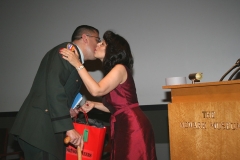 Thanks to Sam Delgado for his financial support throughout the years.

Introduction of Mrs. Esther Betances, widow of LTC Carlos Betances who appeared in the film.

Noemi gives William Cruz (Associate Producer) a commemorative plaque for his fundraising work on the film.

David Roman, Esq. holds his plaque as he listens to Herb Brown speak.

The last acknowledgment goes to Noemi's husband Ray for his unfailing support during the 9 years it took to complete the film.

After the film screening, there was a question-and-answer session with 65th veterans, Raquel Ortiz and Col. Gilberto Villahermosa.

A comical moment during the panel with Eugenio Quevedo.

After the panel, guests greet Noemi.

Sam Delgado shows off his commemorative plaque at the after-party.

Dancing salsa with William Cruz at the after-party.
◄12