Back to Events Photos

El Pozo Productions in collaboration with the Korean War Legacy Foundation organized a return trip to South Korea for fifteen Korean War veterans and their companions from September 17-23, 2017.  The trip was sponsored by the Revisit Korea Program of the Ministry of Patriots and Veterans Affairs of South Korea (MPVA).  Photos courtesy of MPVA, El Pozo Productions and the group members.

Sept. 17, 2017 - Traveling from Texas to Korea were Borinqueneers (left to right) MSG Daniel Jaime (Ret.), his son Jaime behind him, SGM Victor Lopez Nieves (Ret.), his friend LTC Andres Rivera (Ret.) behind him and SFC Ismael Nevarez (Ret.), his son-in-law Edwin Custodio behind him. They were greeted at their connecting flight in Chicago by Jaime Rivera and friends. 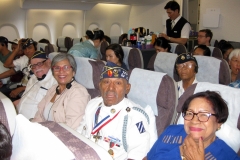 Excited and prepared for their 21-hour flight to Korea with a connection in New York!

Sept. 18, 2017 - Greeted in Korea by the Korea Revisit Program staff with a sign in Spanish "Welcome Korean War veterans!"

VIP wheelchair service for all our fifteen veterans.

Here is our Puerto Rico, New York and New Jersey group that traveled together.

The bus trip to the hotel included an orientation by our Spanish-speaking guide Cathy.

The staff at the Grand Ambassador Hotel in Seoul, Korea greet the veterans as celebrities.

Coordinator Noemi FIgueroa Soulet (standing) introduces the group to each other.

SGM Victor Lopez Nieves (Ret.) gives Lee Min-Jeong, Dir. of International Affairs at the Ministry of Patriots & Veterans Affairs, a Borinqueneers Congressional Gold Medal, a DVD of "The Borinqueneers", a Photo Directory and a 65th Insignia pin on behalf of our group.

Our guide, Cathy, teaches us some Korean.

Our MPVA staff is introduced which includes helpers, security, medical aides, etc. who will be traveling with us at all times.

Victor Santiago Latimer (right) who served in the 34th Inf. Regt. with his grandson Wilson Exia.